More Than A Boxer

“If you put Ali in boxing, you wont get what he really was. The life he lived outside of the ring, what he had to say, the bravery he had, made him what he was: a prophet a hero a revolutionary – much more than a boxer.” George Foreman, Two time World Heavyweight Champion.

Muhammad Ali was, and perhaps still is the most famous man on the planet.

In the farthest reaches of the world, in mud huts in Africa, in homes without electricity or modern conveniences, and in remote villages in Asia you can find a picture of Ali in a place of honor. He is a transcendent and galvanizing figure for his remarkable ring career as well as for his life outside of the ring. Beyond what people thought of him for his ring accomplishments, his pre-fight poetry and antics there is their opinion of him becoming a Muslim and refusing to take one small step forward to be inducted into the Army. As a consequence Ali was stripped of his Championship and barred from boxing.

Ali said “ If I thought the war was going to bring freedom and equality to 22 million of my people they wouldn’t have to draft me, I’d join tomorrow. I have nothing to lose by standing up for my beliefs. So I’ll go to jail, so what? We’ve been in jail for 400 years.”
No doubt, Ali would have been safer in the Army than fighting the men he fought in the ring. Men like Sonny Liston, Joe Frazier, Ken Norton, Ernie Shavers, Leon Spinks and Larry Holmes. While some only saw Ali as a preening Peacock, a loud mouth poetry spouting arrogant fighter, they missed that his behavior was gamesmanship and marketing. Ali said “To be a great champion you must believe you are the best. If you’re not, pretend you are.” “ I am the greatest, I said that even before I knew I was.” What few know about Muhammad Ali, however, is his compassion, good deeds outside the ring, and his philosophical side.

In 1990, just days before the U.S. started bombing Iraq, Ali suffering from the early stages of Parkinson’s disease travelled to that country, met with Sadam Hussein and negotiated the release of 15 hostages. He brought them back home to the United States and probably saved their lives.

One afternoon, driving in Los Angeles, his limousine was slowed by a crowd of people craning their necks to see a desperate man on the ledge of a high rise building. Ali rolled down his window and asked a policeman what was going on. The officer told him that the man was threatening to jump and they were unable to talk him off the ledge. Ali asked if he could help and was told that he could try if he wanted to. Ali went up to the window next to the man, stuck his head out, calmed the man down and told him in part “We are brothers.” He talked this broken soul off the ledge, took him down the elevator to his limo, drove him to the hospital and likely saved his life.

Toni Morrison recalls a story about Ali going to the aid of a despondent old Jewish woman facing imminent eviction from her apartment paying her rent and saving her from being kicked out. Ali didn’t speak of this. He said “The service you do for others is the rent you pay for your room here on Earth.” Ali never boasted about his good deeds believing that if you bragged then what you had done wasn’t sincere.

Muhammad Ali is a complicated man living a storied extraordinary life and like all great men he is flawed and walks on feet of clay.

Much more than a boxer. Silk Screen prints on archival paper. The prints in this gallery are derived from my photographs of Muhammad Ali taken at Chris Dundee’s Fifth Street Gym in Miami Beach during an interview Ali was giving in 1976. During the interview Ali was either pleased, amused or offended by the questions and he expressed himself, vividly, according to his feelings. Ali has never been shy and has always been expressive. I did my best to “grab” as many of his expressions as time allowed. The images of Ali walking to, from and in the ring are also my photos. All these photos sat in my studio for all these years until I “discovered” them again in 2013 and decided to salute Ali with a series of prints. I hope my Muhammad Ali prints hint at the complexities of Ali and help create an interest in his life and the times he lives in. Ali is much more than a boxer he is a courageous man of his times. “If you put Ali in boxing , you wont get what he really was.

The life he lived outside the ring, what he had to say, the bravery he had made him what he was: a prophet, a hero, a revolutionary-much more than a boxer” George Foreman. The prints in Muhammad Ali Gallery 1 are all silk screened by myself and the Master Print Makers at the Lower Eastside Printshop in 2013 and 2014. The edition sizes are between 1 of a kind to the largest edition which is 47 prints. Most print edition runs are between 8 – 20 pieces. The prints are 19” x 25”. 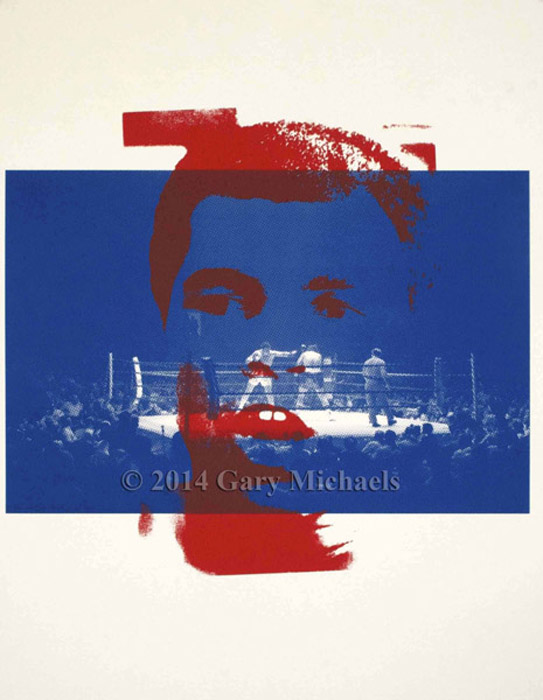